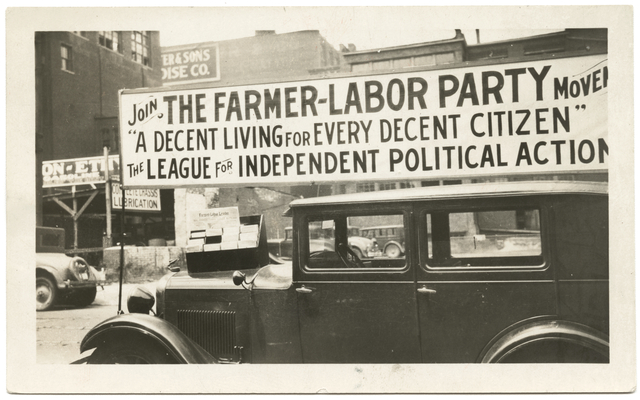 The Minnesota Farmer Labor Party existed between 1918 and 1944 as a highly effective progressive, third party. It  grew out of the Nonpartisan League of western Minnesota farmers. The League ran candidates in Republican Party primaries to become its standard bearer, largely without success. It joined with urban labor groups attempting to do the same thing in the Democratic Party. Both groups joined forces to become Minnesota’s Farmer-Labor Party in 1918. By 1922 the new party ran candidates for office and had their first successes. The party was isolationist, opposing participating in war, and strongly advocated for worker and farmer’s rights.

The Farmer-Labor Party had its greatest success in the 1930s when Floyd B. Olson was elected governor three times consecutively. Although the Farmer-Labor Party was never able to capture a majority in the State Senate, they successfully enacted laws protecting farms from foreclosure, banking reforms, a state income tax, and unemployment relief. They also controlled both seats in the United States Senate and many congressional seats.

Olson died from cancer in 1936. His successor Elmer Benson easily won election. In the 1938 gubernatorial contest he was defeated by Harold Stassen, a moderate Republican. However, Stassen ran a red-baiting and antisemitic campaign, which brought him significant support from Christian nationalists and other right-wing groups. The Farmer-Labor Party never regained its dominance after the end of the Depression.

The Farmer-Labor Party of Minnesota was the most successful third party in the United States. During its existence it compiled a string of victories remarkable for a third party. It won five of nine elections for the Senate, four of thirteen for governor, and twenty-six of ninety-six for the House. In all statewide elections its candidates finished lower than second only once. In congressional contests its strongholds were the northern, western, and central sections of the state. Its strongest victories came in 1932, 1934, and especially 1936, when it controlled the governorship, the state house of representatives, both seats in the U.S. Senate, and five of the state’s ten House seats.

In 1944, Hubert Humphrey and Elmer Benson worked to merge the party with Minnesota’s Democratic Party, forming what is today the Minnesota Democratic-Farmer-Labor Party.