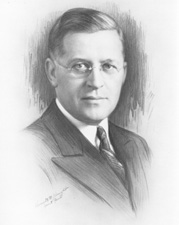 In his unsuccessful campaign for re-election against Republican, Harold Stassen, he was the object of a whisper campaign undertaken by Ray P. Chase, who accused him of being a Communist and being controlled by Jews, several of whom had been students at the University of Minnesota. Chase’s publication about Benson, Are they Communists or Catspaws: A Red Baiting Pamphlet, included many pages devoted to the University of Minnesota, and some of the information was provided by Dean Nicholson.