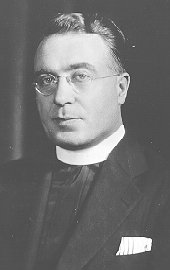 Father Charles Coughlin (1891-1979) was a Roman Catholic priest and radio broadcaster who rose to national prominence during the Great Depression, and who was eventually forced off the air due to his antisChremitic and pro-fascist rhetoric.

Based in Detroit, a city which faced some of the highest unemployment in the country during the Depression, Coughlin was particularly sensitive to the traumas inflicted by the economic and social changes that took place during that period. He argued for the federal government to assure farm and home ownership as well as a limitation on the accumulation of private capital, which would be achieved through wealth redistribution and the transfer of certain assets and services to public ownership.

Because of these ideas, Coughlin became quite popular with farmers and laborers. He was initially a strong supporter of Franklin Delano Roosevelt; however, by 1934, Coughlin, began to oppose the president and the New Deal, arguing with increasing vehemence that Roosevelt was both protecting the interests of Wall Street and promoting communism. Beginning in 1938, Coughlin also became increasingly antisemitic, turning to conspiracy theories and relying on dangerous and discriminatory stereotypes to blame the nation’s economic woes on Jewish bankers. That year, he organized the Christian Front with local chapters. No Jew could be a member, and chapters were encouraged to boycott Jewish stores. Members armed themselves, attacked Jews on streets, and dubbed themselves Father Coughlin’s Brownshirts. In 1939, he questioned the value of democracy on a radio broadcast. He opposed the United States entering WWII after the attack on Pearl Harbor, claiming Jews had created the war for their on advantage.

Although Coughlin was eventually forced off the air by 1942 because of his opposition toward the United States entering into World War II, his mass popularity and reach (some experts estimate that he had an audience of almost thirty million Americans at his peak) provided a platform for growing antisemitism and pro-Nazism in the late 1930s especially among those opposed to Roosevelt and the Democratic Party.